As planned I went out to a desolate hill, accessible by mountainbike, I found a week earlier in the nature park Causses du Quercy for the first activation on this park. The top of the hill is rather flat with good views to all directions - a perfect place for a /P operation. The only downside to the lack of higher trees was the direct sunlight. I picked this afternoon as they predicted some clouds and relative low temperatures (25 Celcius).

I took my mountainbike, loaded all the parts of the (extended) Spiderbeam mast on it with all the other items in a sturdy backpack. Try to imagine how to bike when you have 4 pieces of >1m fiberglass tube with you...

I set up my station quite quickly (too quick as it turned out later) with a 15m half wave end fed wire. As predicted (refer to my previous post) conditions on this band were horrible. After a few minutes of calling I worked only one station in HA with a 51 signal.

I dismantled the antenna and set up the 20m end fed. The band was in a bad shape with very deep QSB (someone would call with S9 and within 30sec would go down to S1) but there were so many stations calling that I was busy for the next 2 hours - thanks to the cluster posts, they always bring a new boost to the amount of hunters.

During these 2 hours my antenna fell down three times. I had not set it up sturdy enough and with a gust of wind the antenna would be out of balance.
After the third time I redid the guy wires and did not have any trouble for the rest of the activity.

When 20m quieted down I extended my Spiderbeam mast to cater for the 40m end fed wire. 40m was not as busy as it usually is with only 17 contacts.

In total I logged 187 contacts from 32 DXCCs. Only six of those were outside of EU (indication of the propagations). Maximum QRB was set to 4800km by a station from HZ (to my surprise). Lucian I5FLN, Massimo IK1GPG, Graziano IW2NXI and Narciso IZ1JMN came by on two bands. One third of the contacts were new to me. 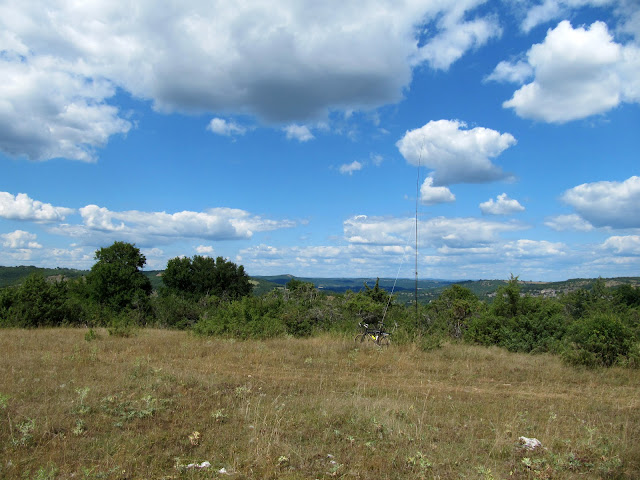 Temperatures were bearable and the view was very good - this combined with a lot of stations calling - both familiar callsigns and new ones - made this a very pleasant activity.

Merci to all that called in!

This afternoon (around 16-18h CET) I will be active from Causses du Quercy, a large nature park in the south of France (departement Lot, 46).

Propagation predictions are very poor, I just hope it won't be as bad as it looks..

Temporary shack @ department Lot (46)Just like last year I have decided to take my radio stuff with me on holiday. Provided I take on all family duties (i.e. no 24/7 operation) the Station Manager (aka Internal Affairs) has OK-ed this.I am never sure how people will react to a radio station on their camp site so I keep a low profile. The shack is in or around the tent (using a laptop and digital modes) and the antenna is behind it - just look at the zoomed in pictures behind the tent: my tried and trusted half wave end fed is up in the trees again.

Using fishing line I can take down the antenna and change the wire to move to a different band.Already worked a number of EU stations and several DX stations (JA, CX, CE, PT) on 10m and 20m on PSK.In about a weeks time I will go over to a nearby nature park that is on the WFF list and has not been activated before: Causses de Quercy (FFF-081). Still have to find a nice low profile spot as I am not sure I have the necessary permit papers with me.

If you see anything like F/PH0NO/P on your waterfall - give me a shout. 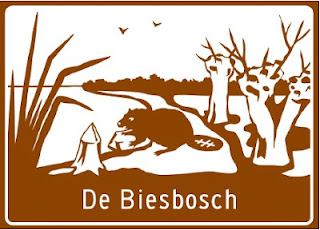 Thanks all for calling in.
Lars, PH0NO/P
Posted by PH0NO at 9:00 PM No comments:

Lousy propagation - test partily completed
As planned I went out with my new aluminium mast, the home made Cobwebb, the yagi and the usual end fed wires, poles and radio stuph.

It took me far more time than I expected to set up the station. The Cobwebb was a mess and setting up the telescoping mast proved quite a muscle job. In the end I did not have the time to raise the yagi, but I was able to test the Cobwebb vs. the half wave end fed.

The first antenna I got up in the air was the Cobwebb. The aluminium mast stayed almost completely upright (just a tiny bit of tilting) without guying, carrying the 2kg antenna. I was able to push the mast out to 12m (40ft). That was good news!

The big disappointment today were the propagations. The solar widget told me this:

I settled for 20m as it was the most lively band, hoping to catch some DX there. I set up the 20m end fed wire (12m high, feeding point @ 2m) next to the Cobwebb to be able to compare the two antennas.

This was the resulting /P set-up:
About 20 OMs participated in the test. Only one of those counts as DX (UA9 - 4000km), the rest of the stations were EU stations within the 2000km range.

QSB was strong, making a comparison dificult. Switching quickly between the two antennas I was able to get a fair idea however, both on RX and on TX. Almost all of the stations reported one S-point difference of the Cobwebb over the vertical. I noticed the same on RX. The difference was more apparent when the other station used horizontal polarization. When the other station was using vertical polarization the picture is somewhat fuzzy (sometimes the Cobwebb was stronger, sometimes the vertical).

If the difference I got in this test (+1 S-point) is the typical difference on all bands and all distances I would not consider switching to the Cobwebb as my /P antenna as it is far less practical to use. However I was not able to assess the DX performance - the reason to even consider using another antenna than the end fed wires - of the antennas, nor was I able to test the higher bands. I would expect the Cobwebb to perform better on the higher bands as its relative height increases when the frequency increases.

So, enough reasons to repeat this test. If I can find another few hours to slip away from other duties at a time that propagations are good enough for serious DX-ing I will post an update on the results.

Thanks to the OMs that participated in the test.
Posted by PH0NO at 9:30 AM 3 comments: