Delta Loop vs End Fed Half Wave on 20m

Recently I came across a post by a German OM DL3TU who was quite pleased with the results of a delta loop on 20m.

I have a delta loop for 40m but rarely use it as it is quite big. For 20m a delta loop becomes very manageable.

As my best DX antenna - the portable hexbeam - is not always an option from a time, effort or space perspective, I am always curious if there is another design that could beat my default go to option: the vertical end fed half wave antenna.

So I read through the notes of DL4AAE (who designed the antenna DL3TU wrote about) and built the same antenna. The nice thing about the version he designed is that it has an impedance of around 50 ohm. The design I used for 40m has 75 ohm and therefore needs some matching solution (like a quarter wave piece of rg59).

This afternoon I went out to test the effectiveness of the antenna as compared to the 20m EFHW vertical. As always I did this by running two identical WSPR beacons for a while. I didn't have a lot of time before sundown so the dataset was put together over 30 minutes in which both beacons transmitted 9 times.

After examining the WSPR signal reports I found an interesting outcome. 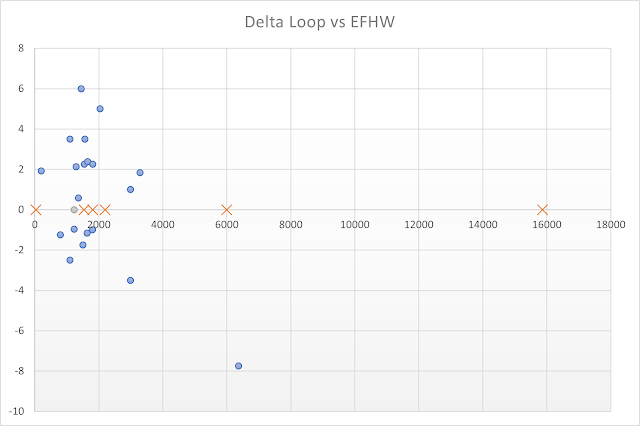 Blue points are the averaged differences between the signal reports of the same spotter for the Delta Loop over the EFHW. The spotters are plotted by their distance from me.

The plot shows that in EU to about 3000km the delta loop beats the EFHW at most spotters, although four spotters only heard the EFHW (orange cross) and the EFHW got more reports in total. So it would probably be hard to tell the difference between the two within EU during a field activity.

Outside of EU the story is a different one. There were three DX stations picking up the WSPR signals. W7, VE6 (6000km) and VK5 (15000km). The VE6 copied both beacons a couple of times but the EFHW was clearly stronger (by average 8dB). The W7 only copied the EFHW but only barely and once - so we will skip that one. The VK5 copied the EFHW 4 times without picking up the delta loop beacon.

The delta loop deserves a bit more testing but at first sight I would choose the EFHW for both its performance and practicality.