Those who have read previous reports of my portable activities know that I usually put in quite a bit of effort to set up a DX worthy station in the field - when possible using my hexbeam and a bit of power.

On the other end of the scale I still have a mobile antenna laying around from when I re-started the hobby in 2010. The antenna is known as D-Original DX-UHV and had some glaring reviews at the time. I did work across the pond to W with up to 7500km in phone and to PY and LU on psk31 (11.000km).

Quite quickly however I moved on to using end fed half wave wires for my portable activities, trying to cover more distance.

Noticing that there are a number of castle (WCA) and nature reserve (WWFF) activators that use a mobile antenna, I was wondering how effective that antenna actually is. I have no doubt the end fed wire is superior to the mobile antenna, but how much better is it? Should I consider going back to using the mobile antenna?

So time to bring out the two WSPRLite beacons (two identical 200mW WSPR beacons that I can use simultaneously) again and head out to my test location north of Arnhem. My reference antenna is a half wave end fed set up vertically - or almost vertically in the case of the 40m version as the pole I use is 18m high. 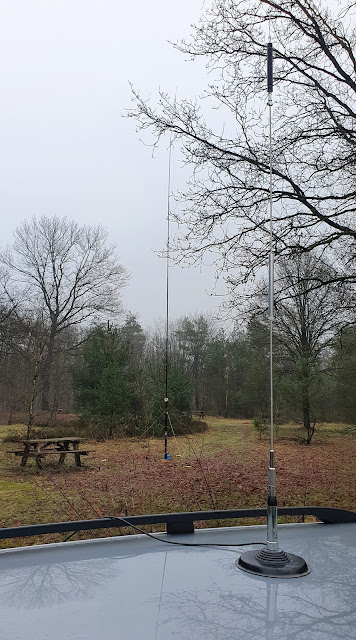 I started out with the 20m configuration of both antennas. The mobile antenna is in this configuration 147cm long. I chose to bring the feed point of the end fed wire about 2m off the ground as I have used this set up as a reference in other tests as well - and it is a set up that would only require a 12m pole so probably more relevant to the average activator.

For the second test of the 40m configurations, I fully extend the 18m pole and then sloped the last couple of meters of the end fed wire so that the feed point was about a meter of the ground. This is how I usually set the 40m end fed up in the field. On the mobile antenna I changed the element for 20m to the 40m version (the antenna is then 195cm long). The DX-UHV antenna can hold two different elements at the same time but for this test I decided to use one at the time.

As expected there is a clear winner on both bands - not surprisingly this is the vertical wire. The question I had was how much the two would differ. Here is a breakdown of the data I managed to collect in the time I had (1 hour on 20m and 1 hour on 40m),

Odx for the mobile antenna was 2200km to SV8 (1 spot -29dB). Odx for the end fed wire was 3100km to EA8 (7 spots). Looking at the reports of stations that copied both signals multiple times, there is an average 10dB difference in the signal strength reported.
On 40m the difference is more pronounced looking at the amount of spots. With less transmission cycles of the beacon the end fed wire reaches more than twice the amount of stations. The reach is considerably longer with TF, TA, 5B4 and EA8 only copying the end fed wire.

So what have I learned.. well the outcome really matches my expectations.
Looking at it from the practical side, the mobile antenna is easier to set up and does not take any more space than the car itself does at the activation location - can be a huge plus in some places. It also requires a lot less room in the car so it might open up a few more possibilities for /P operations.
The consequences however are that I will reach less stations and especially less DX. I have also found that controlling a crowded frequency is more difficult if your own signal is relatively weak. On the other hand... it might not be so crowded if no one hears you (hihi)
The difference is considerable but not overly dramatic though, when conditions are good and signals are around S9 on the end fed wire, you would still put in a good S7 with the mobile antenna. So I will give it a try in an activation when conditions are favourable and simplicity is important for whatever reason. tbc.
This post is one of a series of antenna comparisons I have done. The index to the other tests is here,
Posted by PH0NO at 12:13 AM 2 comments: