From the end of July up till August 14 I traveled through VE3 (and a small part of VE2) with my family. I visited family in Toronto and made a round trip from there up to Manitoulin Island, Algonquin Provincial Park and into Montreal. From there we went back to Toronto via the 1000 Islands area.

My idea was to take my radio with me and to activate one or more nature reserves.

Before heading over to VE3 I contacted the VEFF coordinator - Dave VA3RJ - to find out what nature parks would be on my route. Dave took the opportunity to revise the VEFF list, adding a number of provincial parks in VE3.
He also helped me a great deal by highlighting all nature reserves close to the route I would be travelling.

Although customs was suspicious, I was able to bring my radio on the plane. I took my Yaesu FT857d, a HyEndFed transformer and a collection of wires for all HF bands. As I could not bring a pole I relied on my hockey ball and nylon wire to get my antenna up in a tree.

First activity: VEFF-0158 Blue Jay Creek Provincial Park
The first place where I was near a nature reserve and was able to plan a time slot for radio-activity was on Manitoulin Island. This enormous island is very sparsely populated and would be a nice IOTA candidate if only the lakes surrounding it would have contained salt water - they don't.

The island is on the Canadian islands award list however and features three VEFF nature reserves. Two of those were 1.5h to 2h drive away (yes, it is a large island) and one - Blue Jay Creek Provincial Park - was less than 30 minutes away. So I chose Blue Jay Creek, even though it was impossible to enter this park by car.
I suspected I might end up in a reserve I would have to enter on foot, so I bought two lawn mower batteries (12v and not too heavy) before we headed to the island.

I did check the propagation predictions so I had a vague idea of when the bands would be open to EU but I had no idea what kind of activity levels to expect. I was not disappointed. EU was open from the start for more than 3 hours. What did surprise me was the low activity level from NA. I tried 40m for a while but logged only 2 stations.

Second activity: VEFF-0334 Oxtongue River & Ragged Falls Provincial Park
The second opportunity arrived when we were staying in a cabin just outside Algonquin Provincial Park. That is by far the largest park in Ontario. As it is huge I expect it stands a good chance to be activated by someone else in the future, so I chose a smaller park that borders Algonquin: Oxtongue River. 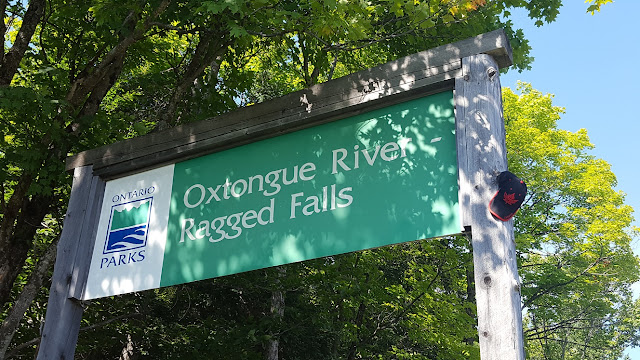 As you can see I was in a beautiful area but radio-wise it was a disaster. In Blue Jay Creek I was near a large body of water (Lake Huron) and that must have played a role. Or radio conditions were just really bad this time. EU was really weak. After 4 hours I had logged a whopping 27 contacts. I feared I would not be able to reach the WWFF minimum of 44 contacts (let alone the 100 I always aim for). After 4h I found that 40m picked up with stations from the US. In another 2h I logged 26 more stations, bringing the total to 53 (in 6! hours) - 21 EU, 30 NA, 1 SA and 1 AF. ODX was S5 at 6800km.

This was by far the slowest activity I experienced ever. I think it is even worse than running the PACC contest in the early morning hours.

Third activity: VEFF-0023 Frontenac Biosphere
On our way back towards Toronto we stopped in a very nice house not far from the 1000 Islands national park (St Lawrence NP). I was thinking of activating that one, when I found out the house itself was located in a VEFF nature reserve: Frontenac Biosphere.

That was as conveniently as it can get. I had bought a power supply locally and found a 110V outlet at the back of the house, where there were a number of suitable trees for the end fed wires. This allowed me to operate until late without disturbing the family.
I planned to have a longer activity starting around the time 20m would open to EU and continuing until 40m would open to EU. I learned from the first two activities that there was a gap when 20m would close to EU, and before 40m would pick up in NA. This time I would not waste an hour logging close to nothing, but I joined my family for dinner instead. The luxury of operating from the place you are staying.. a whole new concept I enjoyed a lot.

I used my HyEndFed trafo with the original "multiband" wire - 12m of wire with a coil at 10m. Resonant on 10, 20 and 40m. It is not very long on 40m but a very practical solution in between trees.

I started on 20m and found that conditions were far better than at Oxtongue River. I could copy EU much stronger - though not as strong as at Blue Jay Creek. 20m was open to EU until around 23h UTC. I logged a number of NA stations and when 20m became slow I went for dinner to come back to 40m when it was lively in NA. I continued and started to hear EU stations from around 4am UTC.

One of the first stations I logged on 20m was Danny ON4VT. When he came back to me on 40m more than 9 hours later and reminded me of the fact that he had already slept in between, I decided it was time to go QRT.

This way the radio brought a nice little extra to a great holiday in VE. Thanks to Dave VA3RJ I had various options available for activations - making it possible to blend them in with all the other family activities.

Thanks to all chasers who came by and kept me busy out in the middle of nowhere.
Posted by PH0NO at 11:43 PM