Acceptable weather for a change motivated me to go out to activate PAFF-0079. This reference had had some attention in the past (>500 QSOs) but most of it years ago. Expecting some Es conditions I brought my hexbeam and my 2-4-6m yagi.

It was rather busy in the area with people happy to be able to go out for a walk. It was difficult unfolding the hexbeam without getting in people's way. Ofcourse I got a lot of questions about this rotary clothesline..

I started out on 6m but that band was not really alive. I only worked one EI station. So much for the effort to bring and setup the yagi.

I went over to the hexbeam starting on 15m as that band sounded quite active.. and it was. I logged more than 70 contacts on that band. Most of those were in the UK - there seemed to be a nice cloud over the North Sea. I was also greeted by Len VE9MY and Linda VE9GLF (P2P) and 5 US stations including the usual suspects Tom KG8P and Robert KD1CT.

After about 1.5h I went down to 17m again logging mostly UK stations and VE5. 17m was not too busy so after 30 minutes I went down one more time to 20m. 20m was in an okay state. It was never very busy but I did log almost 150 contacts in 2h. At the start I had the beam pointing towards NA - logging KA8H and W1OW - but I noticed spots to the east so I turned the beam. That probably helped me log 3 JA stations.

I had skipped the 10m band earlier thinking the Es was not strong enough but I still saw spots on that band (past 20h local time) so I decided to go back up hoping for an opening to SA. With the beam in that direction I logged PU and some 20 more contacts in EU - mostly from south DL to I.

It was getting late but there was one band to my immediate disposal I had not visited yet: 12m. The first response came from Max IK1GPG, who I just spoke to on 10m. In these last few minutes I logged a few more EU stations and FY to my surprise. 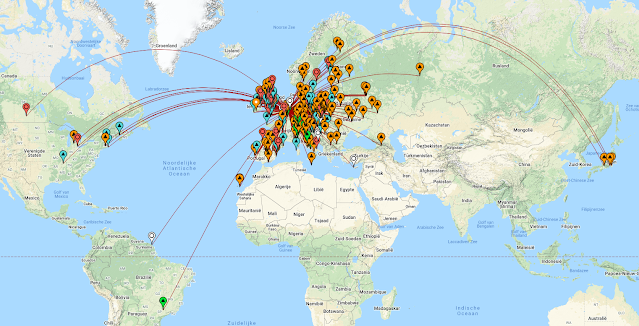 It was so much fun on the higher bands that I never came around to breaking down the hex and going for the low bands. Normally I make most of my QSOs on those bands. However with a bit more time spent than usual (5h) I still managed to log 286 QSOs from 45 DXCC with 12 P2P.
Posted by PH0NO at 2:01 PM