Setting up my /P station for CQWW this weekend I made some movies to give you an impression of what setting up that station entails. 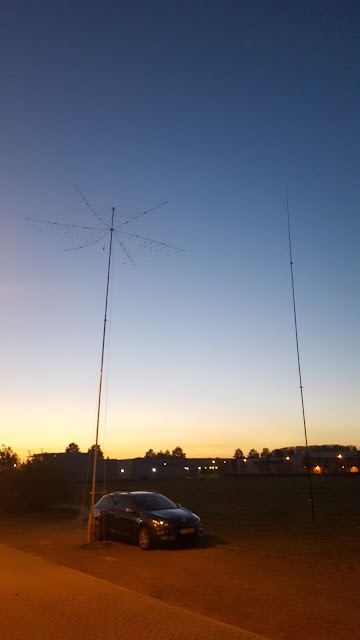 Conditions on HF have been better than they are the last few months. I find this a good reason to spend more time on the lower bands.

Another good reason is that I completed my 100 DXCC on the fourth band just last week or so. It was on 17m. I am not counting on reaching that number on 12m any time soon - as I have failed to use that band when conditions were more favourable. So the next candidates are 40m and 80m. I could also go for 30m of course but phone remains my favourite mode.

With the limited space I have at home I will need to go out /P to work new DXCC on those bands. At home I use a shortened end fed wire for 40m (just 12m long) and that will not really bring me any further than I have reached so far. 80m is even more challenging. I have not worked out an effective solution for that band yet. The other obstacle is that the areas I need to work are generally workable late at night or very early in the morning. Using phone at these hours in a room that is not sound proof will get me into trouble with the rest of the family.

All of this made me decide to focus on the low bands during CQWW this month. A couple of times before I have used this contest to hunt DX by reserving a considerable (to my standards) amount of time during the contest weekend going out /P with the best antennas I have. In the past I have used a 4 element mono band yagi for 10m that created an unforgettable experience where I just worked atno's like there was no tomorrow and I have used my hexbeam with success as well.

On the low bands I used inverted V dipoles before. They work, and have provided me with new band DXCC but they have a (mainly) high angle radiation pattern. It would be nice to try something with a better DX profile. So that is why I went out today to test two verticals I prepared at home: a quarter wave with 4 elevated radials for 80m and an end fed half wave for 40m (this time full size instead of the shortened version I used before).
To be able to switch them easily - without taking down the mast - I use the same radiator for most of the length. The 80m antenna is a bit longer so I have an extension wire I can add / remove that connects to an SO259 socket with the four radials. When I use the antenna on 40m I disconnect the last bit with the radials and add my end fed transformer.

Today was also a test to see if I could set up my 18m mast by myself in the field. Normally I use a support like my car or any sign post or fixed pole I can find. The contest location I use is just open field. After some trying I found a procedure that worked well.

I used my VNA and my radio to see if the antennas worked and they indeed seemed OK. There was no enough time to do serious testing on the air and the bands were in terrible shape (s8-9 qrn/qrm). The plots and TX tests showed me that the 80m antenna is easily usable from 3.6 to well over 3.8mc. It dips in the phone contest region of the band. The bandwidth of the 40m end fed was much wider than the trapped version I used before. I can use it across the whole band.
I also found that the radials of the 80m vertical really need to be off the ground some 10-15 centimeters. If they are too close to the ground the performance really deteriorates with SWR rising above 1:5 easily (1:1.4 when the radials are well off the ground).

It seems I am ready for some action this weekend. Now let's hope the earth magnetic field calms down in time.
Posted by PH0NO at 9:46 PM 4 comments: