Spending most of my radio time /P, I have over the years built and used many different antennas. The inverted V dipole was always one of them but mainly for 40 and 80m as I used end fed verticals for the higher bands (due to the length you quickly end up with an inverted V configuration on lower bands).

I started out with four individual dipoles - one for each band 160, 80, 60 and 40. During my activities I mainly use 80 and 40 of the four so I decided to combine them into one dipole for 40m and 80m - using bullet connectors to change bands. The benefit being that you don't have to change antennas - only lower the mast somewhat to reach the connectors.


Lately I have been using the inverted V for 20m as well - adding that to the multiband version - as I have found it works well within EU and for DX and again it saves me changing antennas.

Looking at the radiation diagrams on 20m you can see that the inverted V (blue) radiates better on the higher angles compared to a half wave vertical (red). Note that this is a broad side view. From the ends the inverted V loses significantly more versus the vertical (10dB at a 15 degrees take-off angle on 20m) - so for DX the orientation counts.

Planning for a future trip where I would have to travel relatively light, I decided to tweak the dipole even further adding all HF bands from 6m down to 80m (160m I would hardly use and would make the antenna rather bulky).
It took two field tests to get it right. I started cannibalizing the existing 20-80m version. After a few hours out in the field I had cut all elements and established that I needed to change the existing 30m and 40m elements. Then time ran out.
In the second run I found a few peculiar mistakes with 15m being quite a bit off (measuring error the first time?). So a few more cuts and tweaks were needed but 2 hours later my antenna was ready.

One thing to keep in mind is that the impedance of an inverted V changes when the angle between the two legs changes - which it always will between deployments. If you increase the angle, the frequency at which the impendance dips goes down. There is a "sweet spot" of element length vs angle that gives you a dip around 50 Ohm.

One eye catching feature of my antenna is the way I have attached the elements (for when they are not connected). I started out with simple rope to hold the pieces together but as I unroll the antenna in a different way (rolling it off a cylinder) than I roll it up (adding turns by hand), the elements are twisted each time. The copper wire can cope with that but the connecting rope transforms into a small knot after a while.
So I had the idea to enable the various pieces of wire to twist independently and - having two daughters in the house - came up with a design featuring pink and purple beads. 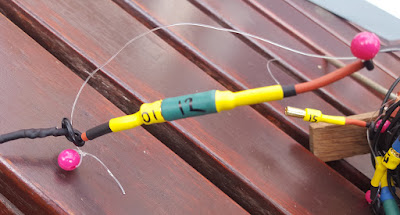 I am quite sure this makes it a unique dipole as far as dipole go. 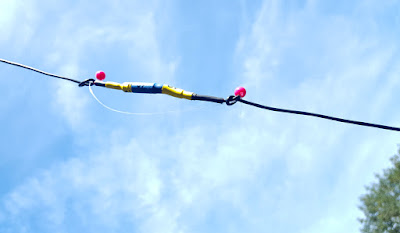