Tips - Setting up the Hexbeam by Folding Antennas

As blogged before I got myself the 6 band portable hexbeam by DL1ELU.
His manual is very detailed so there is no way that I can add anything useful to that. There are however some tricks to learn about the folding and unfolding of the antenna once you have built it from the kit.

What I want to do here is add my experiences with the setting up of the antenna hoping it will help others who like myself did not really get it right first time. If you have tips that speed up this process, please let me know.


Assuming you have put the hexbeam together for the first time, your first challenge is to fold it for storage. So let's start with the folding process.

FOLDING
One important tip: do use a stand of some sort so you can keep the beam upright when folding. I tried it without and ended up with a big wire mess. If you're lucky and your mast goes low enough than leave it on there (mine doesn't - it doesn't go lower than 2m, which means I can't reach the top of the beam). I bring a parasol stand just for the (un)folding.

UPDATE: after a tip of another OM I now use a view pieces of PVC pipe connected to a 5 way fitting (four legs on the ground and one up). This works well, is light and easily transportable. In fact they pipes fit neatly in the Hexbeam bag.

Now the first thing I do is to loosen all the joints of the spreaders and fold them down, like so:


I start with the two spreaders where the driving wires run towards the centre post. I try to keep the wires together by guiding them through the nearest joint, like so:
If all joints have been loosened I fold the inner spreaders up and keep them (inner and middle spreaders) in place with a Velcro strap. Like so:
The parasol stand does a very important job at this point: it keeps wires from ending up on the wrong side of the antenna. If that happens you are in for a nice untangling job later.
The next step I take is folding up the outer spreaders and fixing them with another Velco strap. If you do that you will have something like this:
The wires still look like a mess but that will turn out all right. The next step I take is to secure the bottom of the antenna with a Velcro strap. I use this lowest secured point to fold all the wires over and up. Then when I got all the wires up (you would like to have 4 hands at this point, dropping wires all the time) I secure the wires with another Velcro strap somewhere half way up. Now I have a package that looks like this:


Okay, now you can put the antenna in the handy bag Christian provides and leave it there till the next activity.

UNFOLDING
So how about unfolding the antenna?

I use the parasol stand as described above. It keeps the wires nicely on the right side of the antenna. When unfolding I unstrap the first two Velcro straps and loosen the wires a bit, making sure they hang freely.
The I unstrap the outer spreaders and let them fold downwards. Like so: 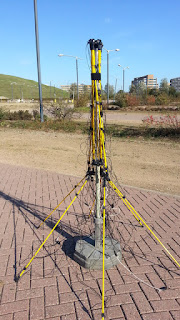 Then I remove the last Velcro strap and fold the inner spreaders down, pushing the outer spreaders outwards. It takes a bit of walking around the antenna and freeing wires that are stuck in joints but in 1 to 2 minutes the antenna looks like this: 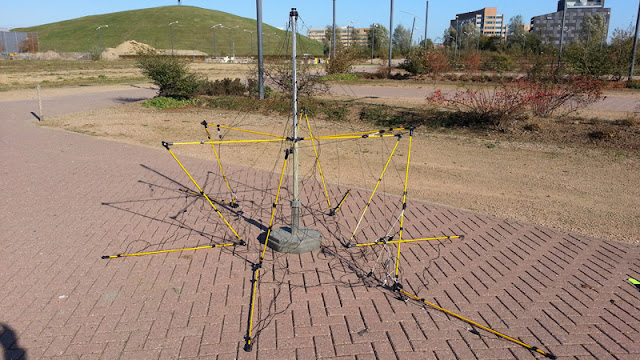 The next thing I do is to close the joint between the outer and middle spreaders. Again you need to walk around to free any wires that are stuck in joints or on wire clamps. You end up with a large spider looking structure if you do it like this: 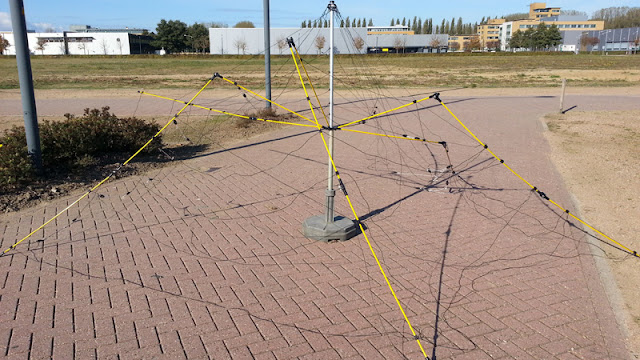 The last step is closing the joints between the inner and middle spreader and moving the completed Hexbeam on to my push up mast. As the antenna weighs next to nothing this is not a very difficult move. It is like walking around with a rather large umbrella.

This process took 15 minutes including taking the pictures. If I solve the folding issue described below I think it can be done faster.

FOLDING ISSUE
I still need to address one issue. I have not fixed the position of the wire clamps. With the folding and unfolding they tend to move a bit. This distorts the delicate balance I created when I first put on all the wires. So now all spreaders bend in different shapes (see the picture below). It is difficult to rebalance the whole antenna and straighten all the spreaders. So in the near future I will remove all the wires and put them on again one by one making sure I fix the wire clamps when I am done (Christian remarked btw that it is wise to fix the wire clamps when you use the antenna for portable operations regularly).